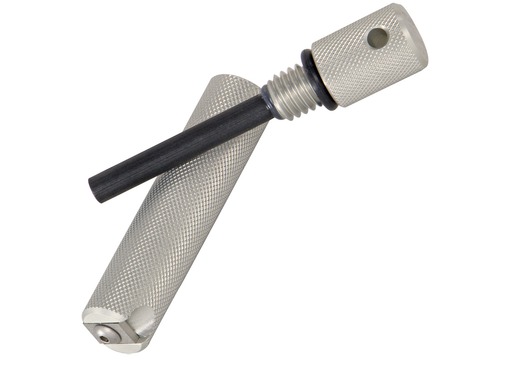 Although there are many look-alikes, the Aurora fire starter is the original Aerospace Quality firesteel, and considered by many to be the best firesteel that money can buy.  The entire fire striker is self-contained within the body, offering a great form of protection from the elements. The outer shell of this unit has a rough-textured surface for added grip and located on the end of the case is the 440C Fully Hardened Stainless Steel Striker. Unlike most firesteels, the striker is not dangling loose on a cord or chain, it is fixed in place proving both convenient as well as allowing the user to strike the ferrocerium flint evenly with each use, resulting in a good well-balanced wear of the steel which not only extends the life of the firesteel, but it also creates a more intense shower of 5000 degree sparks, making lighting a fire easier than ever, even if the firesteel is soaking wet.

Aurora firesteels are used by US servicemen, pilots and they have even been used on expeditions up Mount Everest. The Aurora Firesteel will last most people a lifetime of camping and fire lighting with ease and works out over its lifetime many times cheaper than matches and lighters.

To use the ferrocerium flint, simply remove from the case and use the in-built striker to strike in a downward motion to create a shower of 5000 degree sparks onto a tinder bundle to create a fire within seconds. Birch bark works particular well as tinder. The striker maybe removed and sharpened if need be.

"It took a few goes to get the angle right for creating the spark shower but once you get the hang of it this kit is excellent. Starts my Trangia stove every time and easily sets cotton tinder."