Foraging For The Pignut

The Pignut (often named an Earth Nut) Conopodium majus is a delicate plant which is usually associated with ancient woodlands, but is sometimes found amongst hedgerows and grassy banks, and, on some occasions, within gardens, which were formerly mature woodlands that have long since faded into the past.

The pignut is a member of the notoriously complex and often highly toxic umbelifer family. The umbelifer family is both widespread and common place within Britain. Most of us will be familiar with many of the road-side species, such as the deadly Hemlock Conium maculatum, and the edible, yet difficult to safely identify species of Cow Parsley Anthriscus sylvestris. The pignut is somewhat different, in that the vast majority of us have probably never seen one, and there are a few reasons for this. Firstly, pignut are very small and even when in flower, the tiny, almost dot-like white flowers are only visible if you are in very close proximity to the plant, and even then, the thread-like leaves render the whole plant almost invisible against a complex woodland backdrop.

In terms of size, the pignut plant is usually somewhere between 5-30cm tall and very thin in structure. The fine leaves and stem are vivid green in colour and the white flowers are best seen in April and May, but I have witnessed some specimens flowering in the autumn.

Lastly, it is vital that you identify anything that you intend to eat with absolute certainty. Failure to adhere to this could result in poisoning and even death in some cases. From my years of teaching those about wild foods I’ve noticed many people laugh and shrug this off, but trust me, whilst I encourage people not to be ‘afraid’ of foraging, it is vital that you understand what you are doing. If you don’t, then seek advice from a professional.

The first step in finding a wild pignut is to choose a good time of year. The very best month is May; a time when the pignut is abundant, in flower and as far as the pignut goes, quite large. Spotting them is still a challenge, but most very old woodlands with old oak trees, ash, hazel, beech and old gnarled hornbeam are good places to start. In fact, bluebell woods are ideal spots, and where I find a good patch of bluebells, I usually find many pignuts intertwined with them.

Once you have found a pignut, don’t assume the task is over – it’s only just begun. The pignut has a rather cunning plan to deter wild animals from grubbing up the edible tuber (root). The stem runs at a 90 degree angle from the tuber (the nut) and attaches itself very weakly indeed. When you follow the stem you need to be very care or it will sheer off leaving the nut portion within the ground, nestling against many other tubers and roots, often among poisonous ones, such as those of the bluebell. When grubbing for the pig nut, I use one of these handy and compact shovels if the ground is a bit too hard to scrub away with use of my hands alone. 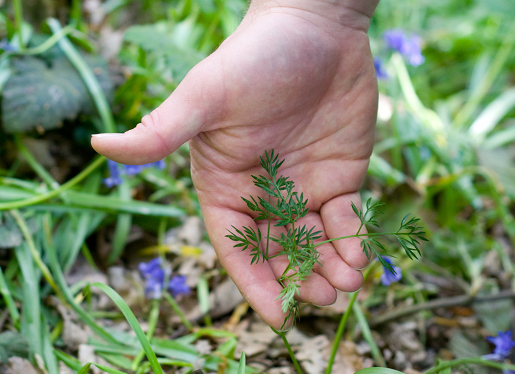 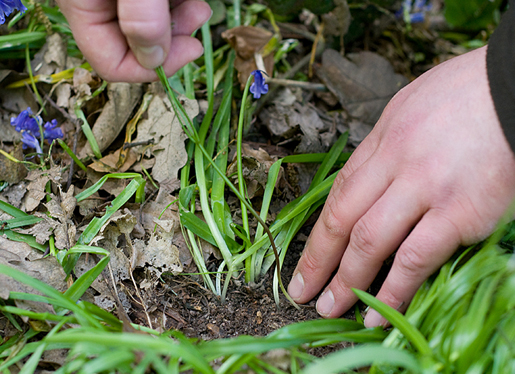 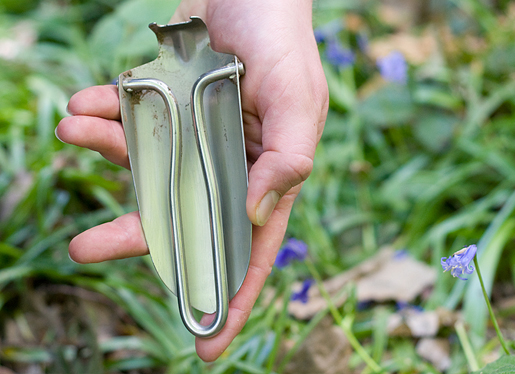 Carefully attempt to remove the whole plant whilst still attached to the tuber (nut). If you’re able to do this, then it will look like that shown in the picture below. The nut will vary in size. They can be as small as a pea or as large as a golf balls, sadly, more often than not they are on the pea-size scale! 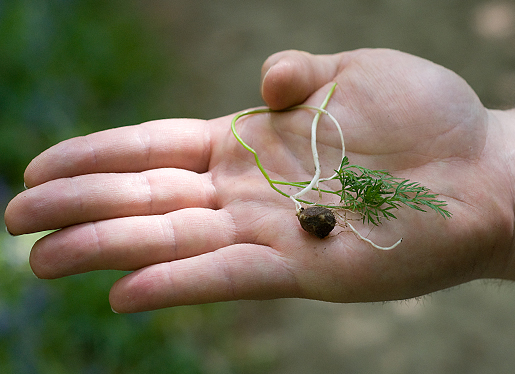 The tuber (nut) wears a thin brown jacket, which you need to remove with care. The nut is a creamy white colour. 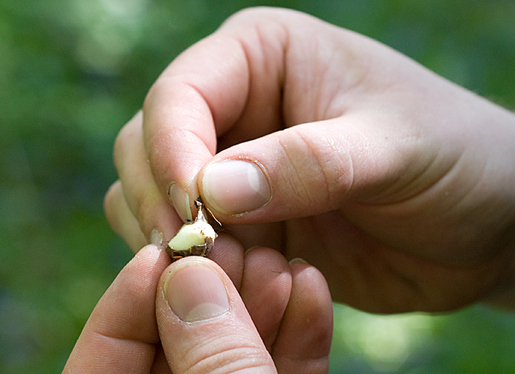 Lastly, after all of your hard efforts, it’s time to taste your reward. The taste is somewhat like a cross between a carrot and a parsnip, but with a slightly peppery kick.

I hope you enjoyed this short article on the pignut, and that maybe you’ll try one for yourself. But please do respect the environment and adhere to the law of the countryside – it’s there for a very good reason.

Catch you on the trail.