Would You Survive? Bushcraft Challenge Part 2

I had planned to write more posts for Greenman Bushcraft’s Blog, but in all honesty, whilst trying to conserve my battery and making hideous errors in my typing due to fat thumbs I’ve written less than I’d like, but they’re still coming in, which is the main thing!

So, it’s nearly been 2 months since I first set off on my outdoor challenge, and what a few weeks it has been! In fact, it seems more like two years. Time passes at a much slower rate when the pace of life beings to ease up, which I must say, is refreshing.

My first month or so was spent in a woodland in the South East, living from only what I could forage around me, and although I’m confident in my skills, It has been hard, and on several occasions I’ve felt quite hungry. The first few weeks I survived primarily on blackberries, apples and a few plums, but the plums were already getting thin on the ground and a few weeks in they were pretty scarce. But luckily for me I found a fantastic hazel grove – which was great fun, and this year’s seems to have been a good nut year. I remember Kris telling me that there is usually one good nut year in every 3 or 4 years, so I struck lucky it seems. When I first started to gather them in late September they were still quite milky in texture and really very nice, but as I write this in October they are now much more as you’d come to expect them to be in terms of texture. Thankfully hazel nuts have a high calorific count, as they take some time to gather and even more time to shell without a nut cracker. I did of course try stones, and sticks to break them, but this more often than not resulted in a projectile, so I settled for putting them in my Zebra Billy Can and giving them a hard whack with a smooth stone so not to damage the pot but also keep the contents secure.

So far, however my biggest thrill was fishing! And fishing with nettle line! I was desperately craving protein in a form other than a nut, and I was kindly given permission to fish a local and rather wild lake that runs next to a river. The lake is privately owned, but it’s far from managed and took me a great while to even get to the water’s edge for a snoop. There were a few large carp in there, but I didn’t have the heart to try and catch one of them as they were very large and had called that lake home for a long time, but what I did notice was the rather invasive and predatory red signal crayfish!

The crayfish had somehow made their way into the lake by way of the river – presumably when it had flooded at some point, but never the less, they were a prime target for me, but not something easily caught on a hook – I needed bait in terms of something large enough for them to grab on to. I’d already noticed a dead rabbit earlier in the day that was hanging in a tree of all places – either it was inspired by the Olympics or it had been dropped there by a bird of prey (I suspect the latter), either way, it has been there a while so I fetched that to the fishing spot, tied the nettle twine around the carcass and tossed it into the lake where I’d seen some crayfish in the shallows. Then, I waited for a bite. I couldn’t really feel them on the bait unless they touched the nettle string, so I kept a watchful eye on them and they didn’t spook like a fish would, and as they grabbed onto the bate I pulled them out one by one and kept them in my pot. I should stress at this point that these were American Red Signal Crayfish – and NOT our endangered native White Clawed Crayfish, and I was granted special permission to catch them. 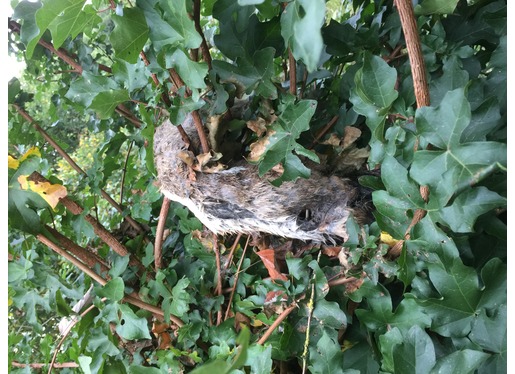 I managed to remove seven of these critters from the lake and later cooked them for dinner. Although they appear quite large, and almost lobster like, they’re more like a large freshwater prawn and you’d need a good few for a good meal, but I was proud of my achievement for the day and went to bed satisfied.

My routine for the next few days was similar – foraging nuts, a few berries (less as the season went on) and the occasional crayfish to keep me going, but I have set my sights on catching some fish before I leave too, as well as sampling some of the plants growing around the water’s edge – such as Reedmace.

The nights have certainly been much colder (as of October), so I’ve needed to rely more heavily on having a fire and stocking up on the very abundant fuel to keep me going through the nights.

As I lie here in my hammock now, and write this final blog post of October I can’t help but think of the months ahead and how challenging, but ultimately exciting they will be. I’ve already had a taste of wild living and what it entails, but I’ve yet to test my skills in the harshest of months when food will be sparse and the potential of extreme dips in temperature at night. Only time will tell how well, or badly I cope, I suppose.

So, until my next update I will now be heading back into the woods to forage some fungi before moving on to my second location, where the environment will be slightly different and finding food will possibly be more challenging. And I wonder if on Halloween Night I will see anything odd, as location two is supposedly haunted! Eeek!

I will update you all soon. Thank you for taking the time to read about my bushcraft adventure.

Matt Hopkins is one of newest members of the blog team. Matt has set himself the challenge of a lifetime and aims to survive from the land for a full 12 months. Matt has kindly agreed to share his story via the Greenman Bushcraft Blog - so watch this space for important updates on how Matt copes with this daring challenge as he travels through the British countryside, woodlands, moors and coast lines.